Ninawachi is a missions school located in the town of Huaticocha in the jungle of Ecuador.  Construction is well underway with the goal of starting classes on January 15, 2014 – a mere nine and a half months away – and there is still a lot to do.  You can see from the pictures that the prayer hut, bridge, directors’ home, boys’ and girls’ dorms, and the shop are mostly completed.  We have just begun to dig the footers for the school itself.

Even as we build the school, we have already seen people of many tribes and nationalities gather for worship, including those from the US, Canada, Ecuador, and Nicaragua, as well as from the Shuar, Quichua, and Huaorani tribes of Ecuador.  We have seen a glimpse of the heart of God:  that His children from all nations would gather to glorify Him.. 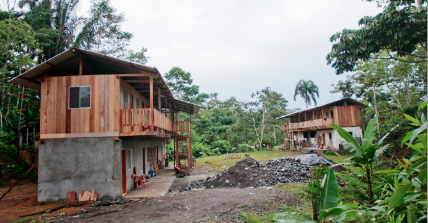 This week we hosted a short-term missions team from The King’s Academy in San Jose, California.  They helped with projects at Ninawachi, such as painting the dorms, and they went into three more communities with dramas and puppet shows.  It is always a huge blessing to have teams help us take the love of Christ into places that rarely experience love at all.
We know that it is God’s desire to raise up men and women to serve him full-time, and we

ask that you pray with us that Ninawachi will be used as a tool in this mission, training and equipping those who are called to go into the jungles and all the world and make disciples of the Living God.
__